Haily Group Berhad was incorporated on 21 February 2020 as a private limited company under the name of Haily Group Sdn Bhd Via an internal reorganisation exercise, Haily Construction Sdn Bhd and Haily Machinery Sdn Bhd (by virtue of it being a wholly owned subsidiary of Haily Construction Sdn Bhd) became our wholly owned subsidiaries. Subsequently on 25 August 2020, we were converted to a public limited company to embark on the Listing on the ACE Market of Bursa Securities.


Haily Group Berhad launched its prospectus for ACE Market listing on 30 June 2021 with the aim to raise RM20.4 million. The initial public offering (IPO) exercise involved a public issue of 30 million shares at 68 sen each.


Haily Group Berhad was successfully listed on the ACE Market of Bursa Securities on 21 July 2021 with its share price opening at 79 sen or 11 sen above its issue price of 68 sen.


Haily Machinery Sdn Bhd which was formed in August 2011 is principally involved in the rental of construction machinery.


Haily Development Sdn Bhd was incorporated on 20 June 2022 with an initial issued capital of 2 ordinary shares issued at a price of RM1.00 per share. The intended principal activity is property development.


Haily Capital Sdn Bhd was incorporated on 26 August 2022 with an initial issued capital of 2 ordinary shares issued at a price of RM1.00 per share. In January 2023, it entered into contracts to manage and harvest durian and other fruits on 2 plots of freehold agriculture lands measuring 5.00 and 9.78 acres each, both situated in the district of Raub in the State of Pahang for contract period of 5 years commencing 1 January 2023.

We aspire to be the choice builder by delivering high quality construction products and services to our customers in a timely manner and seek to create sustainable returns to all our stakeholders.

In January 2023, Haily Capital entered into contracts to manage and harvest durian and other fruits on 2 plots of freehold agriculture land, each measuring 5.00 acres and 9.78 acres, both situated in the district of Raub in State of Pahang for contract period of 5 years commencing 1 January 2023. Haily Group Berhad was successfully listed on the ACE Market of Bursa Malaysia Securities Berhad on 21 July 2021 with its share price opening at 79 sen or 11 sen above its issue price of 68 sen.

Haily Group Berhad was incorporated on 21 February 2020 as a private limited company under the name of Haily Group Sdn Bhd. Via an internal reorganisation exercise, Haily Construction Sdn Bhd and Haily Machinery Sdn Bhd (by virtue of it being a wholly owned subsidiary of Haily Construction Sdn Bhd) became our wholly owned subsidiaries. Subsequently on 25 August 2020, we were converted to a public limited company to embark on the Listing on the ACE Market of Bursa Securities. 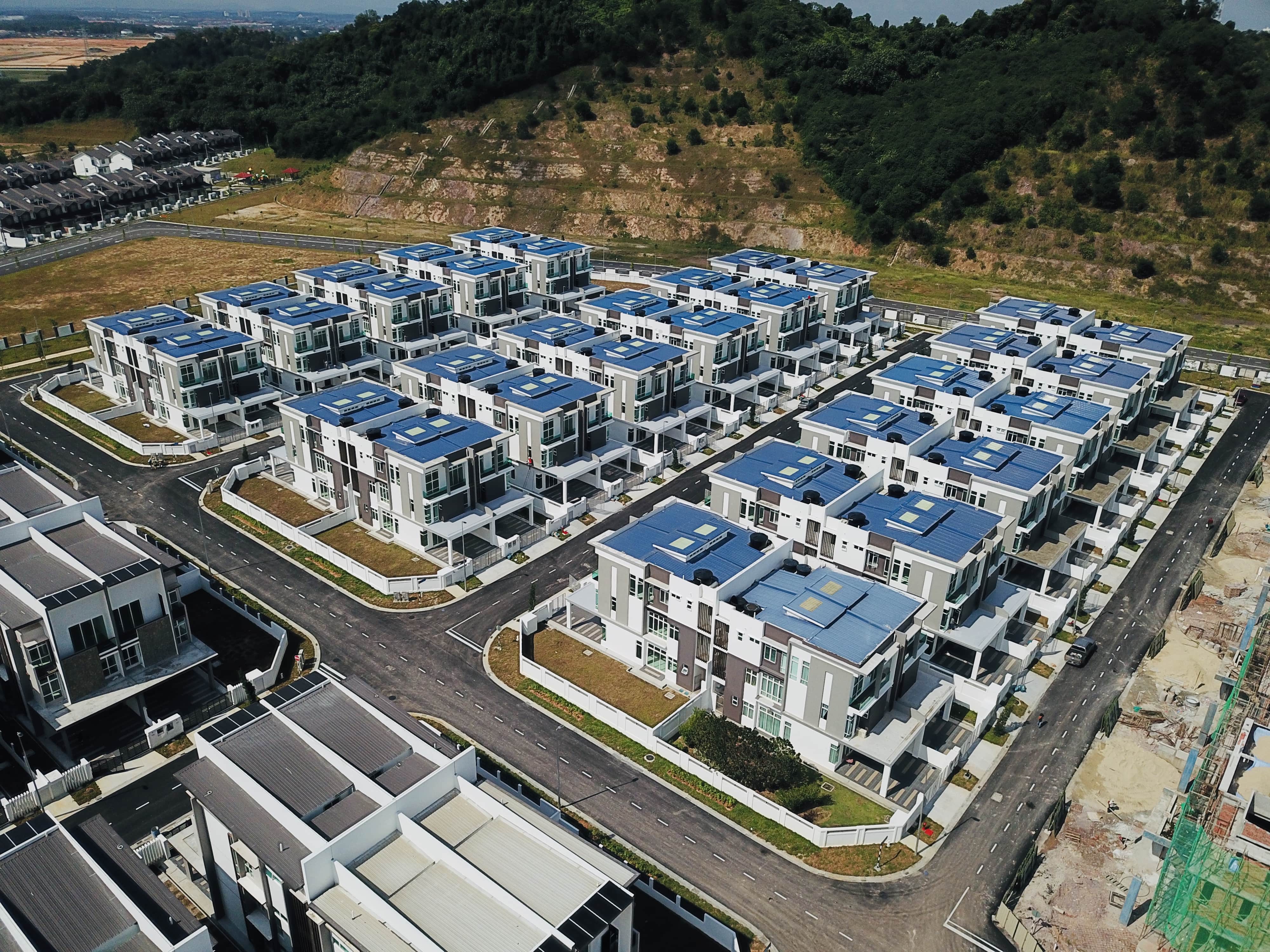 We secured the contract for the construction of the Project Plentong High Rise Phase 2. We secured our first contract for the construction of a high-rise building construction project, a 19-storey apartment namely Summerscape Johor Bahru.

Haily Machinery Sdn Bhd was incorporated in August 2011 and principally involved in the provision of rental of construction machinery.

We secured our first of several contracts for the Taman Sri Pulai Perdana 2 Project and Sierra Perdana Project. Haily Construction Sdn Bhd was incorporated in May 2007. Haji Mohd Jaffar Bin Awang (Ismail) commenced his career with the State Government of Johor (“Johor State Government”) as a temporary trainee and then, served as a full-time employee in January 1978 as a Johor Civil Servant in the District and Sub-District Land Office in Kulai. In March 1978, he was transferred to the Johor Bahru District Office to take up the position of Assistant District Officer (Community Development) and thereafter, transferred to the Johor Bahru Land Office to be the Assistant Collector of Land Revenue in January 1979.

From October 1981 to January 1983, he applied for study leave from Johor Government Secretaries Office (Administrative Department) to further his studies in University of Hull. Upon graduating with a master’s degree, he resumed his employment as Assistant Secretary with the Johor State Government in the Johor Government Secretaries Office (Service Department) until December 1987 and was subsequently, transferred to the Office of the Johor Government Council as Secretary from January 1988 until December 1990. From January 1991 until April 1992, he was Secretary in the Municipal Council of Johor Bahru Central and thereafter, transferred to the Johor Bahru District Office as Chief Assistant District Officer (Development) from April 1992 until May 1995.

In March 2014, he was appointed by the Johor State Government to serve as a member of the Johor Public Service Commissions and officially completed his term of service in March 2018. He is currently a Director of Loong Soon Kemajuan Sdn Bhd, Tasek Development Sdn Bhd and Tasek Homes Sdn Bhd. 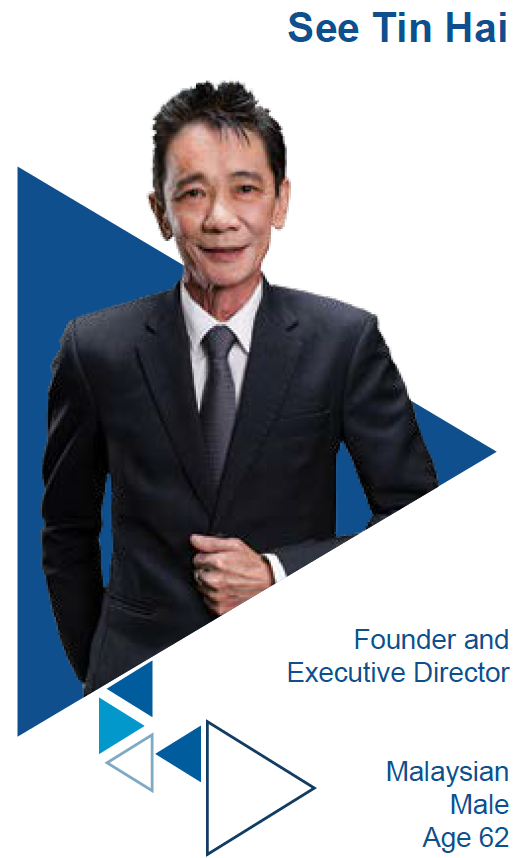 See Tin Hai is the founder of Haily Construction with his wife, Kik Siew Lee on 10 May 2007. He started his career in 1980 immediately upon the completion of his SPM in 1979.

See Tin Hai started his career as a house renovator. See Tin Hai was running his own business in his personal capacity throughout the period of 1980s to 2000s focusing on house renovation, electrical and wiring works.

With the experience gained over the years, See Tin Hai founded Haily Construction with his wife, Kik Siew Lee on 10 May 2007 to tender and undertake construction services for property developers. See Tin Hai has dedicated his entire career in the construction industry and is responsible for the overall Group’s business direction and development strategies including overseeing the entire tendering and construction process for all our projects. 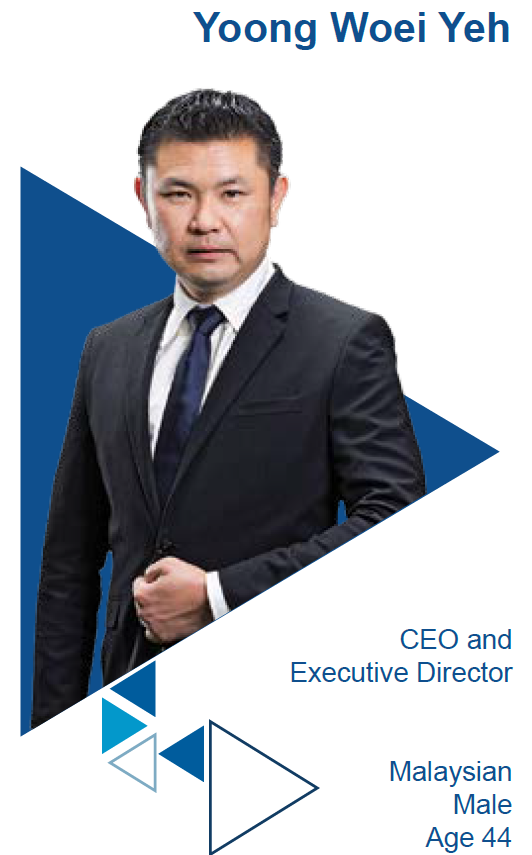 As the CEO of our Group, Yoong Woei Yeh is responsible for the day-to-day management of our Group including but not limited to organisational effectiveness and implementation of policies, strategies and decisions. He is also responsible to lead, supervise and manage a team of executives, ensuring that the appropriate risk management practices and policies are implemented and to assess business opportunities for our Group. 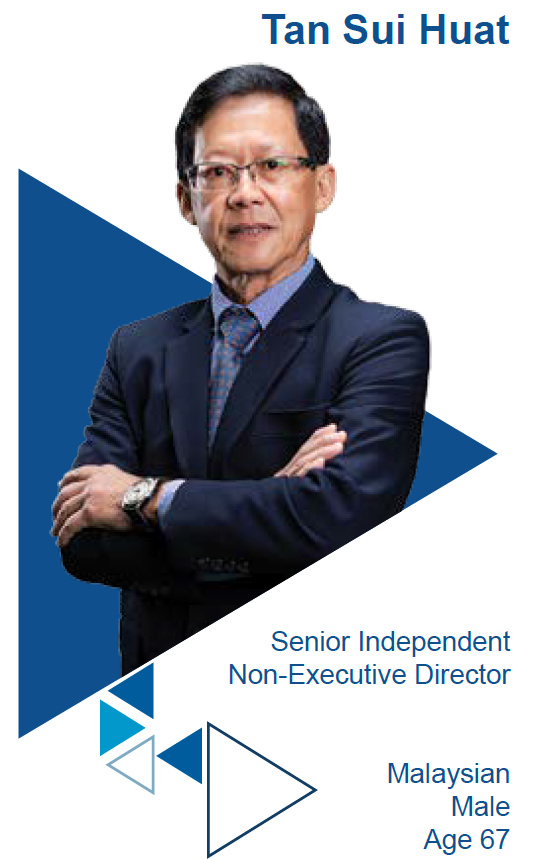 He is currently the Managing Partner at K H Koh. He is also a member of the Disciplinary Committee of the Advocates & Solicitors Disciplinary Board. Throughout the period of January 1994 to December 1995, he was engaged with various appointments such as, Senior Accountant in PT Batasan in Jakarta, Indonesia from January 1994 to September 1994 and subsequently, as Group Finance Manager in Koda Woodcraft Sdn Bhd from October 1994 to March 1995 and later, Finance and Administration Manager (Asia Pacific) of a Thai costume jewellery manufacturer, Soleil Trading (M) Sdn Bhd based in Malaysia from April 1995 to December 1995. In December 1995, he took up the position of Financial Controller in Niro Ceramics (M) Sdn Bhd until October 1997. He then worked as a management consultant and also co-founded his management consultancy and advisory business, Seven-S Consulting Sdn Bhd (“Seven-S Consulting”) in 1998. 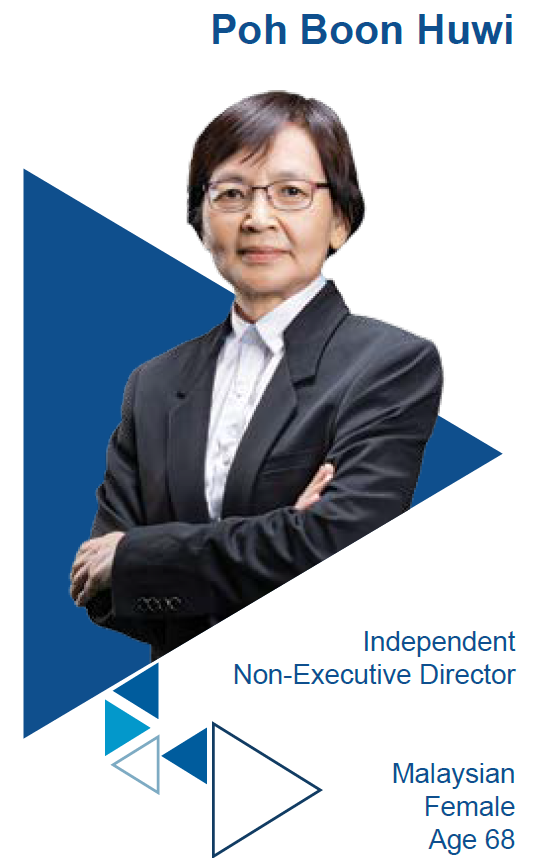 POH BOON HUWI started her career in January 1980 as an Assistant Accountant in A. A. Mutual Insurance Group in Wellington, New Zealand until February 1981, when she returned to Malaysia. In September 1981, she joined Azman, Wong, Salleh & Co as an Audit Assistant and was subsequently promoted to team leader, until she left in November 1983.

In January 1984, she joined the internal audit department of Malaysian French Bank Berhad (later renamed as Multi-Purpose Bank Berhad) as an Officer and left in December 1996 as an Assistant Vice President. During her 13 years of service, she was involved in managing the information system audit and the branch audit, besides auditing of the head office functions.

She subsequently joined the internal audit department of Bumiputera Merchant Bankers Berhad as a Manager, in charge of the operations audit. In February 2000, she was selected and transferred to be the head of systems and methods.

Due to consolidation of the banking industry, in January 2001, she accepted the offer for continued employment in Alliance Bank Malaysia Berhad (“Alliance Bank”) (previously known as Multi-Purpose Bank Berhad which merged with among others, Bumiputera Merchant Bankers Berhad). She joined the group internal audit which was responsible for the internal audit function of the entire Alliance Banking Group (“the Group”). She was with the Group internal audit until her retirement in December 2010 and her last position was Vice President, Corporate & Commercial Banking Audit. Subsequently, she rejoined Alliance Bank for 1 year from January 2011 until January 2012 as a contract staff and assumed the same responsibility.

Currently, Poh Boon Huwi is helping in the management of her family’s oil palm plantation business and other investments. After her graduation in March 2020, she joined RDC Arkitek Sdn Bhd as a Project Architect until November 2021 when she resigned to join Haily Construction in January 2022 as an Assistant Project Manager.

On 25 May 2022, she was promoted to the position of Head of Contract & Business Development of Haily Construction. Long Cheow Siong started his career with KPMG PLT (then known as Peat Marwick Mitchell & Co.) in 1985 as an Articled Clerk with the view to qualify for CPA. He then left for commercial exposure where he joined Country View Berhad, a company mainly involved in the property development as a Senior Manager in Accounts and Services in December 1990. Long Cheow Siong was instrumental in the listing exercise of Country View Berhad on the Main Market of Bursa Securities in 2002.

Long Cheow Siong left Country View Berhad in July 2007 and he assumed the position of CFO with Tasek Maju Realty Sdn Bhd, a group with diversified business activities ranging from property development, hospitality to the operation of shopping malls, office building and petrol station. He was subsequently promoted to the position of the group’s COO in May 2012 and at the same time, he also took up the role as the general manager of a 4-star hotel located in Johor Bahru, a hospitality unit owned by the said group.

Long Cheow Siong left employment in early 2018 and pursued his own consultancy practice by setting up a consultancy firm with other partners known as ECL Advisory Services, an accounting service provider which was established in November 2017 and is currently not involved in the day-to-day operations of ECL Advisory Services. He joined Haily Construction as CFO in April 2019 and was appointed as CFO of our Group on 2 September 2020.

As the CFO of our Group, Long Cheow Siong is responsible for overseeing the financial and human resource management including, the establishment, maintenance and review of the financial and administrative internal controls, projection monitoring/ budget preparation, preparation and review of financial information including annual financial statements to facilitate the discharge of our Group’s statutory reporting obligations, as well as treasury management and corporate finance related matters. He is also responsible to ensure that the human resource and administrative policies and practices adopted by our Group are in compliance with all statutory regulations and requirements. As the COO of the Group, he is responsible for the entire project management activities of our Group and liasion with the relevant authorities to obtain the requisite approvals. Lim Kok Siang is also responsible for the planning, organising, directing and overseeing operation of our Group’s projects management which includes project budgeting, planning and allocation of manpower and resource requirements as well as project scheduling. 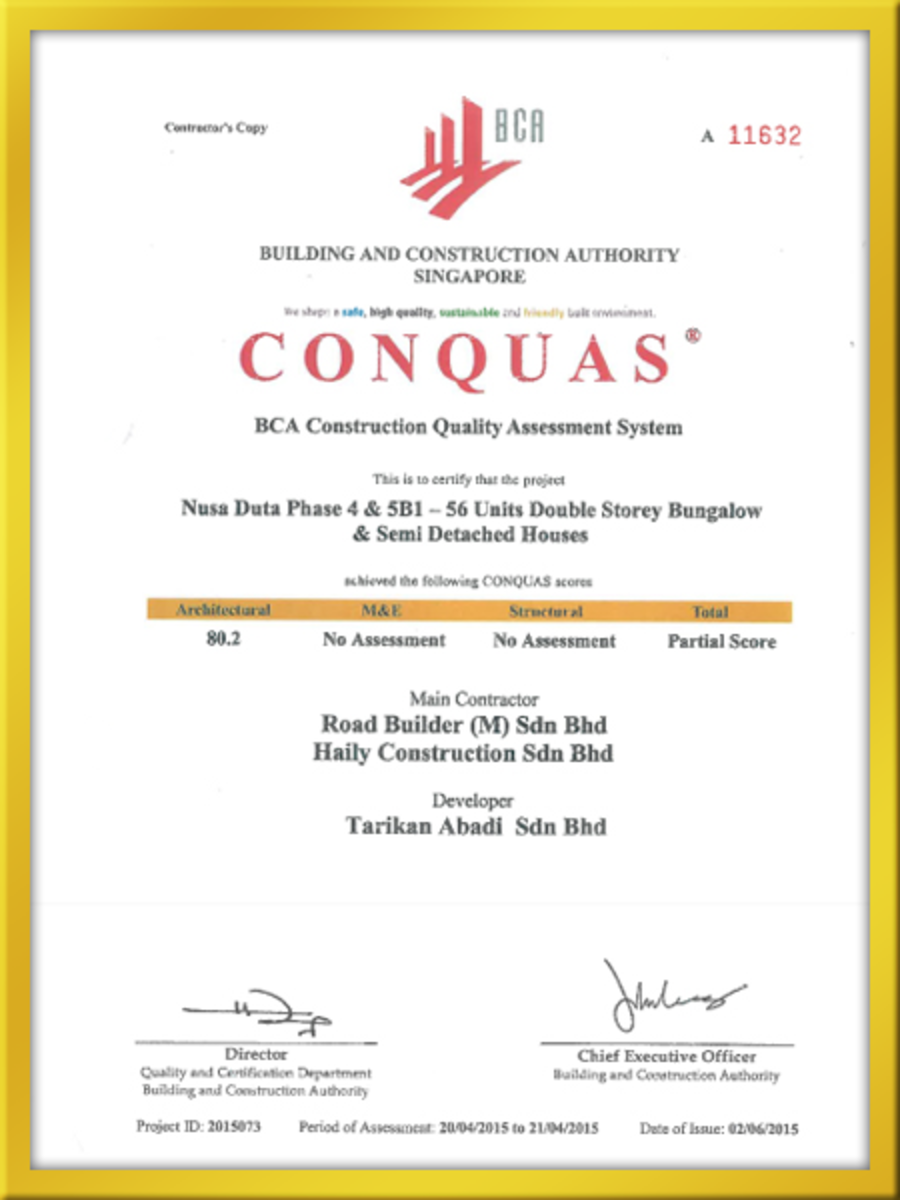